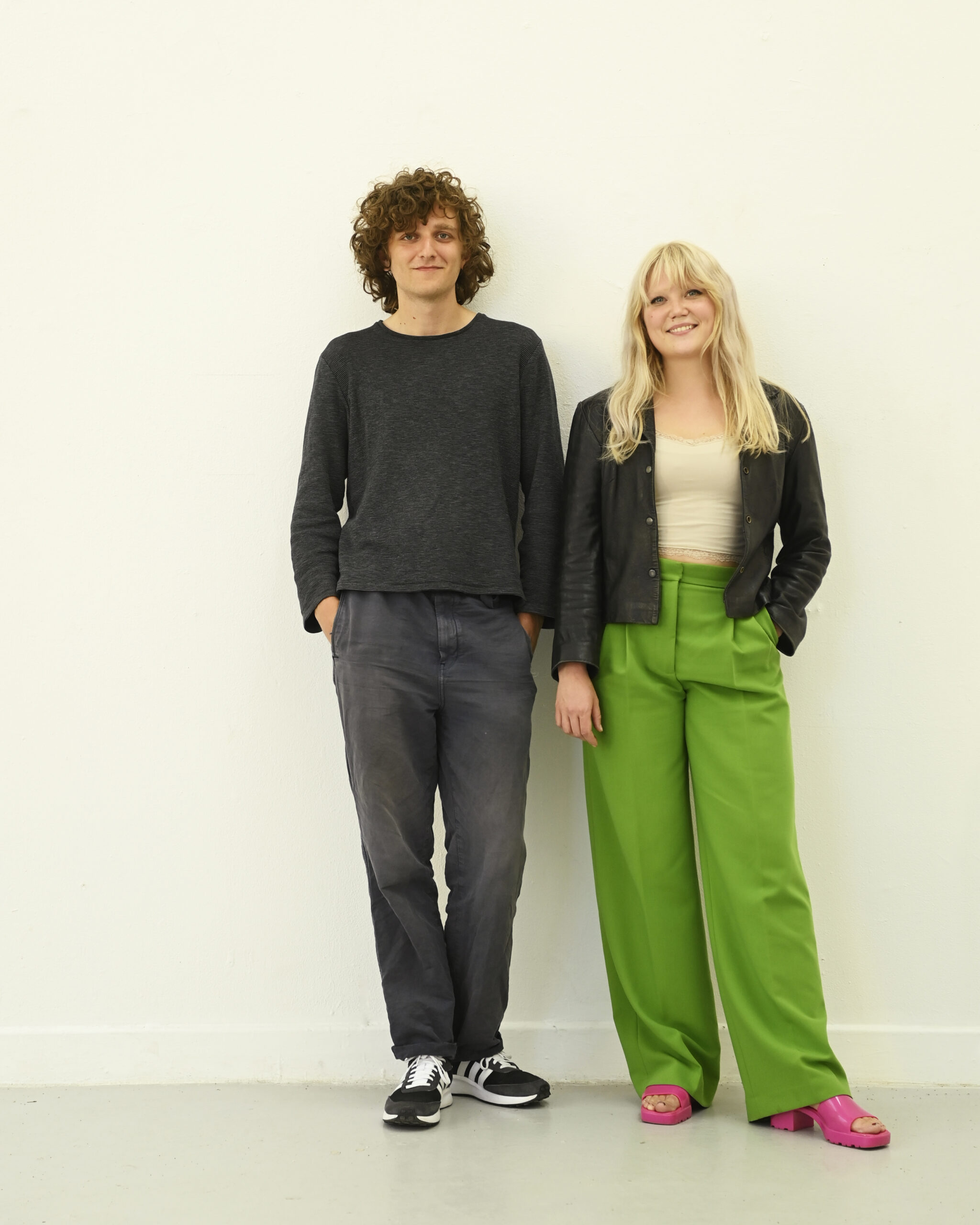 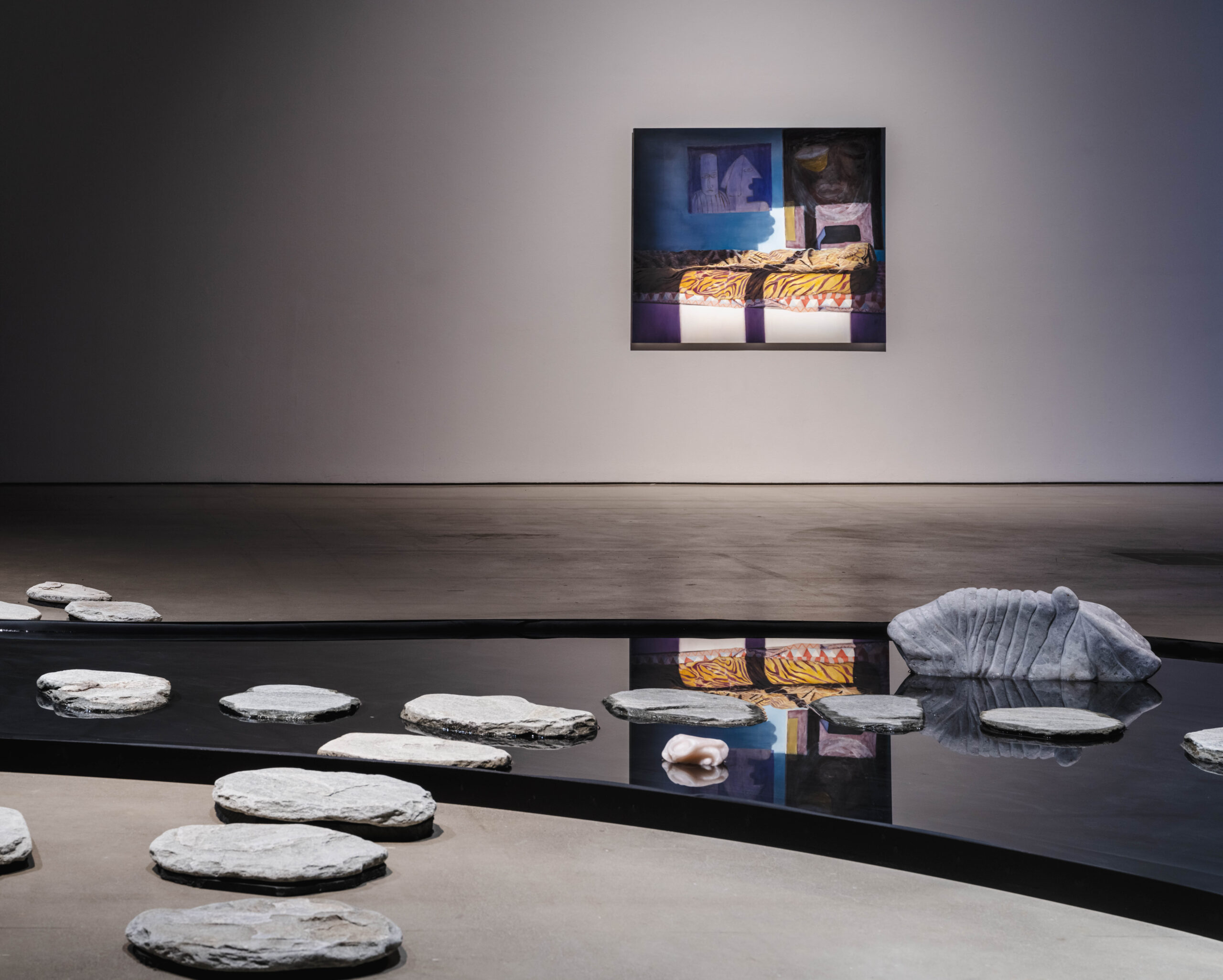 Every year, the Maria Bonnier Dahlin Foundation awards grants to young Swedish artists to support their work. This year’s grant recipients are Sara Ekholm Eriksson and Simon Wadsted. The exhibition at Bonniers Konsthall is an opportunity for the grant recipients to present their works on a larger scale, and for new and unexpected dialogues to arise between their artistic practices.

While Sara Ekholm Eriksson’s sculptural installations in materials such as stone, glass and water generate a form of statement blending fact and fiction, Simon Wadsted’s paintings evoke a sense that something dramatic is about to happen, or just happened. Each has their own distinct and radically different approach: Ekholm Eriksson’s processing of natural materials is physically taxing and occasionally brutal, whereas Wadsted in his studio paints studies using various techniques in search of an intuitive way of seeing the works. In the exhibition, the two practices meet in a common time-space, where past, present and future translates into a continuum.

Sara Ekholm Eriksson’s art is based on nature. Her interest was awoken in childhood, when she accompanied her ecologist father on field trips. Ekholm Eriksson works primarily with sculptures and spatial installations. The materials are handprocessed; she chisels and models anatomic shapes by hand that suggest extinct marine creatures and plants or science-fictionlike life forms. Inspiration is found in the history of the materials themselves, such as the sediment layers in limestone with fossils that are millions of years old, evidence of a geological metamorphosis. She also values interdisciplinary collaborations with researchers and artists in other fields.

A key work in the exhibition is En vetsaga om metamorfosen, 2022, a large installation with sculpted stone blocks and artificial corals that seem to grow out of the water. The work explores experiences of time and materiality and visualises our own mortality. The same idea seems to underpin the work These stairs will flood as the memories of us form into fossils, 2022, where the relationships between the materials is visualised. As thetitle indicates, a staircase is flooded, but not by water but glass, which has oozed down the steps. Ekholm Eriksson also seeks to create larger contexts where art can be included and help to influence and generate new ways of thinking. In the project Life Lophelia, she collaborates with researchers from Gothenburg University to create sculptures intended for use as artificial coral reefs. Placed on the seabed off the west coast of Sweden, the idea is that they will contribute to a richer coral habitat.

Today, Simon Wadsted’s primary medium is painting, although he originally began painting as a way of developing as a photographer and filmmaker. Soon, however, he discovered that painting involved a special way of seeing, which he wanted to explore. Wadsted works figuratively, sourcing his imagery from the surroundings. This can consist of things he sees and allows to go off on fictive tangents. The motifs feature different stories and worlds, but no people. A form of open narrative, as in Curtain from 2019, a work that originated in a Teams meeting, where he noted the yellow curtain with a naive print of red horses in a small inverted attendee box. An essential component in Wadsted’s works is light, and how, by manipulating shifts in light, he can change what we see and create dreamy realism. This approach is obvious in Early spring, 2021, where we see a bedroom bathed in a springlike sunshine that gives a sense that the air is vibrating.

Wadsted explores the interplay of fiction and reality in his motifs. His artistic approach stems from the search for a state of mind he describes as “clear ambivalence”, a reference to the wolf hour, in French called entre chien et loup: the time between night and dawn, when the light is deceptive and makes it hard to tell the difference between a dog and a wolf, friend or foe. At first glance, the work Scissors, 2021, shows an ordinary pair of scissors, maybe nail scissors, but on closer inspection they look sassy, even threatening. Wadsted likes to re-evaluate the already seen, his works are like segments from the (un)reality that the viewer is confronted with.

Sara Ekholm Eriksson and Simon Wadsted confront the viewer with intense scenes that prompt us to think about life and existence. Ekholm Eriksson’s spatial installations combine natural and artificial materials into sculptures inspired by biological, transient processes that remind us of our own mortality. In Wadsted’s paintings, we encounter unspoken narratives, where light is often the protagonist and contributes to a dream-like mood. His motifs are characterised by isolation and occasionally a sense of unease. Together, the two artists’ works offer a poetic image of life’s search and initiate encounters between reality and fiction.

Simon Wadsted was born in 1994 and holds an MA in Fine Arts from the Royal Institute of Art (2022). Light often plays a key part in his paintings, indicating a course of events. Subject matter from his own surroundings is processed so that the paintings slip in and out of reality, with cinematic references. In his practice, Wadsted seeks to revalue the already seen and positions himself in a dreamy realism. Wadsted has exhibited at Galleri Mejan and the Royal Academy of Fine Arts in Stockholm. Simon Wadsted lives and works in Stockholm.

Sara Ekholm Eriksson and Simon Wadsted confront the viewer with intense scenes that prompt us to think about life and existence. Ekholm Eriksson’s spatial installations combine natural and artificial materials into sculptures inspired by biological, transient processes that remind us of our own mortality. In Wadsted’s paintings, we encounter unspoken narratives, where light is often the protagonist and contributes to a dream-like mood. His motifs are characterised by isolation and occasionally a sense of unease. Together, the two artists’ works offer a poetic image of life’s search and initiate encounters between reality and fiction.

Sign up for invitations to openings and information about our events and exhibitions.