Participants in More Than Sound

Sound artist, Tarek Atoui, believes noise is transnational. Recognized not only for his performances, musical compositions and sound engineering, Atoui is an inventor of DIY electronics. Seeking instruments that were light, modular and transportable, Atoui began creating electronic machines from second-hand toys, programmed and built to produce sounds triggered by certain movements of the body and methods of ‘playing’. By simultaneously composing, programming, and rehearsing, each step of his practice is translated into the next, creating what Atoui calls ‘a triangular work process.’ In addition to his own compositions, Atoui has pioneered numerous youth workshops, giving participants the opportunity to explore sound-making and create DIY instruments from found objects.

Tarek Atoui was born in Lebanon in 1980. Currently lives and works in Paris. At the age of eighteen, he moved to Paris where he studied contemporary and electronic music at the French National Conservatory, Reims. As a creator of conceptual sound works, Atoui incorporates politically, geographically and culturally relevant sound material and samplings into each composition depending on for whom and where he is performing.

With more than a decade of music production under his belt, Hans Berg’s house music and electronic soundtracks can be heard not only in the contemporary club scenes of Berlin, but also within the anthropologically marshy and infernal claymation video artworks of Swedish artist Nathalie Djurberg. The slow-motion techo tracks and synthesized sounds are inspired by Berg’s own experiences of raves and radios in his youth; and now as a live performer, interaction with his audience brings an extra dimension to his music. The origin of his collaborative work with Nathalie Djurberg began with the two Swedish artists fortuitously meeting in Berlin years ago where they both were studying at the time, escaping their small home towns of Sweden. Since uniting, the two have continued a dialogue between practices, working together and exploring the magnitude of how sound compliments image, and image to sound.

Born 1978 in Rättvik, Sweden. Lives and works in Rättvik. Hans Berg is working with the Swedish label Kant Recordings and British label Fullbarr Digital, releasing both digital and vinyl.

Recent performances include: Venice Biennale 2009, performance toghether with Nathalie Djurberg, for which they received the Silver Lion Award. 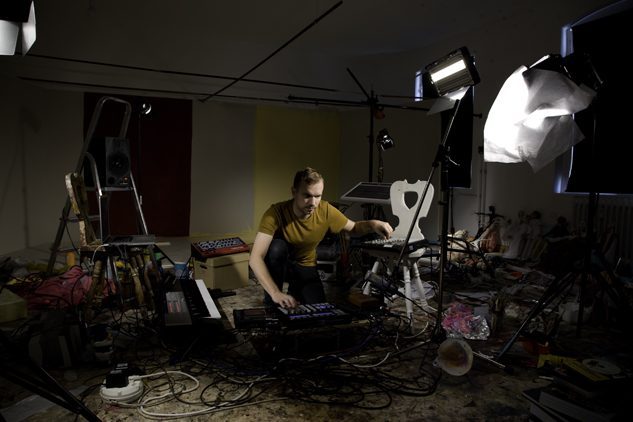 What does a squirrel sound like? Or a bicycle? Malin Bång’s musical composition December Splinters illuminates sounds of motion by stripping bare the physicality  In her work, she develops the idea that movement and energy are the most essential components of music.,  Though regarded as a composer, Bång’s oeuvre spans a broad spectrum of mediums and collaborations including music for instrumental ensembles, orchestral music, staged music, electronic music, instrumental sound installations and performance pieces. As an active performer herself, Bång both improvises and performs live electronics, as well as her own setup of various toys and objects that expand her instrumental palette and create friction within her scores.

Malin Bång was born in Gothenburg, Sweden in 1974. Lives and works in Stockholm. She is the resident composer and co-artistic director of Curious Chamber Players, Sweden’s experimental ensemble of young musicians.

Ayse Erkmen’s site specific works respond to the physical nature and hidden histories of architectural spaces. Her sound installation, Ghost, was originally created for the Thyssen-Bornemisza Art Contemporary in Vienna, formerly the Palais Erdödy-Furstenberg, where centuries ago Ludwig Van Beethoven spent many months. It is said that Beethoven had developed a special friendship with the heiress and countess Anna Maria Erdödy, to whom he dedicated the canon Gluck, gluckzum neuen  Jahr (wo0176). Within Erkmen’s installation, the canon composition is sung by a single soprano, representing the voice of a young girl whose ghost is rumored to live at the palace. The sounds are luminated by minimal hanging lamps throughout the space, but remain as immaterial as the stories of which they tell.

Ayse Erkmen was born in Istanbul in 1949, and lives and works in Istanbul and Berlin. The common thread between each of Erkmen’s interventions, whether sculptural, sound-based, visible or ephemeral, is site specificity. Often forcing viewers to reconsider expectations of space and artworks, Erkmen reflects her concerns for physical and cultural landscapes she finds herself within.

Carl Michael von Hausswolff is a composer, visual artist and curator. Since the late 1970s, Hausswolff has expanded his ongoing investigation of electricity, frequency and paranormal electronic interference. Using such devices as cameras, tape decks, radar and sonar to record static, background noise, and silence, he creates musical compositions that investigate and reveal the sound that hides within silence. Because of his interest in EVP (Electronic Voice Phenomenon), a field of research that claims communication from the otherworldly can be contained within micro-sounds hidden within static, Hausswolff amplifies the inaudible. His performed composition includes sound recordings from various locations within Stockholm.

Carl Michael von Hausswolff was born in 1956 in Linköping, Sweden, and is based in Stockholm. He is the curator and producer of freq_out, an ongoing sound installation since 2003 that invites artists from various fields to compose on-site, frequency specific sound compositions, to be played simultaneously creating a ‘single, generative sound-scape’.

Susan Hiller’s audio installation What Every Gardener Knows can be discovered within the ‘garden’ landscape of Stockholm’s Vasaparken. Every hour, half-hour, and quarter-hour, Hiller’s electronically timed sound piece plays a carillon of music she composed based on  the 19th century Austrian scientist Gregor Mendel’s theory of inheritance. Though Mendel’s discoveries within genetics were used as a base for the ‘science’ of eugenics, Hiller’s interpretation of the Mendelian code rather communicates and celebrates ‘the variety and richness of genetic patterns which characterize all living things, ‘including weeds’.

Susan Hiller was born in Tallahasse, Florida in 1940. She lives and works in London and Berlin. What Every Gardener Knows was originally commissioned for the exhibition Genius Locii in Stadtpark Lahr, Schwarzwald (2003), and has later been exhibited at the 5th Berlin Biennial (2008).

Susan Hiller’s works have been exhibited internationally at biennales in Moscow, Sydney, Gotesburg, Habana, Berlin and most recently in dOCUMENTA (13), Kassel, Germany. A major retrospective of her work  took place  last year at Tate, London.

Matti Kallioinen breathes life into his constructed environments of otherworldliness. In his new installation at Bonniers Konsthall, Nervous Manifold, one travels through a forest of extraterrestrial forms, where limp fabrics hang deflated in a swamp of darkness, fog and flashing lights. Using programmed kenetics, Kallioinen’s sculptures inflate with air, dancing in synchronicity to the motion of light and sound. The music directs the choreography of the space. Using DIY techniques and hand construction, Kallioinen presents his viewers with overwhelming unfamiliarity that leave one feeling both closer to and further from what we know as the truth.

Matti Kallioinen was born in Uppsala, Sweden in 1974 and currently lives and works in Stockholm. Like the title of his recent publication The Synthetic Supernatural (Kalejdoskop Press, 2011), Kallioinen continues to build and grow and stimulate experiences of artificial life, so much that our experiences of synthetics and unfamiliarity becomes uncannily organic; one could almost say, supernatural.

Haroon Mirza’s kinetic installations, both audible and visible, present challenging and often dislocated environments, guided by noise. Often embracing DIY aesthetics, Mirza assembles and fuses elements of light and sound, building immersive spaces for sensory experience. First created for the 54th Venice Biennale in 2011, The National Apavilion of Then and Now presents a triangular anechoic chamber filled with a saturated drone of noise. As the sound grows louder, a suspended halo of white light hanging from the ceiling grows steadily brighter, until silence breaks, suddenly plunging viewers into complete darkness. His Untitled works piece together components of electronics and equipment in a more homespun manner, but again guide us through an orchestrated composition of stimuli.

Susan Philipsz tucks her sound installations into the corners of the public realm, where carefully chosen folk songs and contemporary ballads sung by the artist herself seep from historical sites, paved pathways and white walls. In her installation It Means Nothing To Me, however, Philipsz presents an intimate narrative of her personal history, of her childhood. The ominous photograph tells the story of her father burying a tinfoil wrapped stick in a nearby field for her younger sister to discover left by fairies. Meanwhile, the melancholic air carries two voices throughout the space, Philipsz and her father, singing a beloved childhood song, The Ashgrove. Philipsz decribes the song having a ‘melancholic air’ evoking ‘a pastoral scene of green valleys’ and in the second verse ‘it is revealed that the ashgrove is also the place where the singers love is buried’

Susan Philipsz was born in Glasgow, Scottland in 1965. Before deciding to use her voice as a medium, Philipsz studied as a sculptor. Philipsz is the recipient of the 2010 Turner Prize Award and has recently been commissioned to complete a permanent sound installation for Governors Island, New York in 2013.

Scanner’s Elevator Music installation leaves one gazing out upon an invisible soundscape. Using new technologies as well as classical instruments, Scanner composes methodical ambience from infinite noise. Familiar sounds such as humming or soft breathing emerge from the fog of synthetics, revealing a humanistic quality that Scanner has always sought within digital technologies. His oeuvre, existing between museum spaces and open spaces, performed with 100 violinists and thoughtfully installed in white cubes, communicates a powerful universality of sound to listeners worldwide.

Born Robin Rimbaud in Southfields, London in 1964. Lives and works in London. Scanner took his stage name from his early use of a police scanner, from which he would sample radio signals and incorporate them into this music. He has collaborated with such musicians as Radiohead and Bryan Ferry, and such institutions as the Royal Ballet and Tate Modern.